Bamenda, Cameroon, 31 August 2016--In August 2016, UN-Habitat and the Government Delegate of Bamenda City Council, Mr.Vincent Nji Ndumu, launched the Bamenda Public Space and Market Place Programme. Present at the event were representatives of the five regional Ministries including the Ministries of Housing and Urban Development; Public Works; Environment and Nature Protection; Lands, Surveys and State Property; and Planning and Economic Development; in addition to local authorities, the mayor of Bamenda 1 neighbourhood and a representative each from Bamenda 2 and 3 neighbourhoods.

Furthermore, over 25 students from three different universities, 8 community members and 5 local government officials also participated in the launch. At the launch, Mr. Remy Sietchiping Leader, Regional and Metropolitan Planning Unit, UN-Habitat reiterated the importance and interest in public space and market places, and highlighted the different components of the program.

"The City of Bamenda is privileged to be at the center of this pilot initiative in Cameroon, assessing public and market spaces to develop a City Wide Strategy for the City. It is interesting to have students and some key stakeholders trained together, to undertake this exercise which will be for the greater benefit of the City. We cannot wait to enjoy the benefits that this partnership with UN-Habitat will bring to the present and future generation of the Bamenda inhabitants," said Mr. Ndumu.

Following the launch, UN-Habitat held a two-day training workshop for the participants where they learnt how to carry out public space and market place assessments and inventories using tools developed by UN-Habitat. The first day of training included a briefing, configuring, quick testing of the tool and an in-depth discussion related to the tool and the components of the different questionnaires. On the second day, participants had practical training and tested the tool at different sites.

UN-Habitat and the Bamenda city council team also visited the site earmarked for public space design, the Botanical Gardens. The design will be prepared by the community using Minecraft; a 3D computer based video game. In addition, UN-Habitat trained the students, 30% of whom were women, in undertaking profiles of each public space and market place in the city, using the Kobo tool box mobile device application, an open source application. Each profile will include the location, geo-reference data, and the use of the space.

By using a single mobile device to collect a huge amount of data, community participation is increased and likelihood of errors minimized. Using this tool, the community and youth were able to personally record the current situations of the public spaces and market places in their neighborhoods. Within one-and-a half days, the twelve groups of data collectors successfully collected data for 86 public spaces and market places in different parts of the city.

Bamenda city is the capital of the Northern West region of Cameroon. It is the 3rd largest city in Cameroon, with a current estimated population of 500,000, and a total land size of 366km2. According to the new master plan developed by a local consulting firm, the city is expected to be home for about 2.1 million inhabitants in the next ten years.

Cameroon is one among over 80 countries where UN-Habitat is working to improve the lives of city dwellers. Prior to the launch of the Public Space and Market Place Programme in Cameroon, UN-Habitat has worked in the country on different projects including Energy Efficiency and Sustainability, National Urban Policy, Safer City, and Slum Upgrading. It is expected that the pilot programme will not only improve the current situation in Bamenda, but will also be emulated in other cities and towns in Cameroon. A city-wide strategy for public space and market places is also planned as part of the programme. 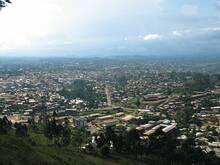