Beira, 27 April 2016--UN-Habitat and the Municipal Council of Beira (CMB) last week launched the Multifunctional Community Centre for Renewables Energy Project in the slum of Munhava, around the city of Beira in Mozambique. The USD 158,000 project that began in 2011 was as a result of co-funding from the German foundation BASF STIFTUNG and support of the Local Agency for Economic Development of Sofala (ADEL Sofala).

The Community Centre is place of new experimentations, production and use of various forms of renewable energy, and it starts with full operation of the biogas system from human waste, production of briquettes and solar energy and will support the local economic development and urban resilience.

The project intends that the inhabitants of Munhava slum have access to clean energy, better sanitation, clean water and at the same time to provide opportunities particularly to young people and women to learn, exchange experiences and generate local initiatives linked to the development of their communities, as a contribution to strengthening community organization. The Centre will be managed by a local association made up of community members, mostly young people and women who are presently being trained on issues related to renewable energy production, environment, small business management and accounting lead by ADEL Sofala in coordination with the local community.

Inserted in an informal area and next to a small informal market, the Centre has a community kitchen, a meeting and events room, playground, tanks for supply of drinking water and public toilets connected to biogas system and will benefit about 500 families of Munhava and surroundings. UN-Habitat involvement in Beira and other cities of the country is focuses mainly in four strategic pillars:  Spatial-economic growth and transformation, urban governance and management, resilient urban development and housing. 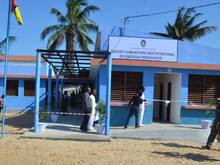