04 Dec 2015, Paris, France. As the world heads to a new climate agreement, parties and participants at the United Nations Climate Change Conference Cop21 in Paris highlighted the role of cities as the place where the struggle to mitigate climate change will be either won or lost. Cities play a critical role in emissions, thus they must also become key actors in global efforts to bring down greenhouse gas emissions. With this sense of urgency, UN-Habitat launched the 'Guiding Principles for City Climate Action Planning' at the Climate Change Conference COP-21 in Paris. The publication establishes guiding principles for action planning in cities, based on international evidence and best-practices. Instrument for cities to adress climate change “The new UN-Habitat Guide is all about orienting cities towards concrete, comprehensive climate action. The Principles are designed as an instrument for cities to tangibly address climate change and provide effective city-level climate action planning tools” stated Raf Tuts, Coordinator of the Urban Planning and Design Branch of UN-Habitat at the launch session. Representing the view of cities, the Mayor of La Paz, Luis A. Revilla H. expressed that “efficient climate change planning has to include local authorities in decision making through strengthening the vertical integration”. As the world was increasingly urbanized, the 21st century agenda would have to focus on greatly reduce vulnerabilities of people and infrastructure to the impacts of a changing climate.

Defining the specific tools Manish Bapna, Executive Vice President of the World Resources Institution WRI pointed out that “different cities need different solutions, these guidelines help cities in defining which tools to use in their specific context”. By using the guide, cities would be able to develop City Climate Action Plans that are ambitious, inclusive, fair, comprehensive and integrative, relevant, actionable, evidence-based, transparent and verifiable. 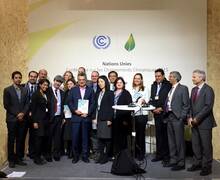