Kisumu, Kenya 24 May 2016 -- UN-Habitat, with the support of the Japanese government recently organised a two-day workshop on Urban Planning for the members of the Kisumu and Turkana Counties in Kenya. The workshop aimed to sensitize the officials of their role in the approval of urban planning developments, highlighting the expected quality of new urban interventions by their relevance and feasibility for the specific county. The workshop discussed the main components of urban planning including the necessary legislative and urban economy, in addition to the different trends of urbanization in different regions including Kenya, the transformative power of urbanization and the overall understanding on the necessity of planning for human settlements within a long term sustainable development framework.

The spatial planning component has been decoded through UN-Habitat`s principles in promoting sustainable urban development such as compactness, social integration and mixed land use, as well as connectivity between people, services and urban public space. The participants discussed the challenges and opportunities of urban planning in their counties, as well as legislative and economic potential of the urban development of their towns. Some of the challenges identified included weak legislative and financial support, community land ownership, insufficient qualified personnel and lack of information on current developments and lack of prior planning for future development.

The workshop further focused on policy making, investments and regulations of cities, and the connection between planning and implementing urban development. Participants received key messages on the necessity of adequate framework for urban development including laws, policies and data on current developments. The Turkana County Chief Officer in charge of lands, physical planning and urban areas management, Mr. Mark Ewoi agreed on the importance of public participation processes in project development, but also in increasing the capacity of local governance structures in their legal, economic and technical components, for taking proper decisions in approval and commissioning of projects.

Furthermore, he mentioned that Turkana County will be able to monitor spatial planning through systematic urban development as well as generate more revenue from urban areas. Mr. Jackson Lowoi, Member of County Assembly of Turkana County added that the workshop provided useful information for changes in cities and towns including Turkana County hence, the county assembly should provide necessary legislation. Mr. Ito Yo, a Japanese Permanent Representative to UN-Habitat, emphasized the importance of urban planning and advised the delegation members to create strong urban planning institutions, with the capacity to effectively formulate and implement plans. Through the information provided, the workshop set the inception of such system that counties themselves have to develop. 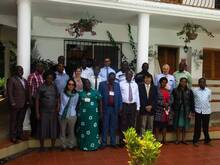