Ramadi, 20 March 2017 –UN-Habitat recently handed over 489 housing units in Ramadi that were rehabilitated or installed under the project “Promoting Urban Recovery in Newly Liberated Areas in Iraq”. The project undertaken by UN-Habitat Iraq Programme, was generously funded by the Government of Japan.

By the end of February 2017, approximately half of the over 3 million displaced persons in Iraq returned to areas liberated from ‘the Islamic State of Iraq and the Levant (ISIL).’ However, in many of these areas, significant parts of the building stock are damaged or destroyed, making rehabilitation of housing one of their most pressing challenges.

UN-Habitat tackles recovery through a unique community-based approach, explains Mr. Erfan Ali, Head of UN-Habitat Iraq. In addition to assisting the community with rehabilitating damaged houses and infrastructure, UN-Habitat actively engages community members in the rehabilitation work. In both neighbourhoods, 150 returnees were engaged in rehabilitation and installation activities, empowering them socially and economically. Returnees were also trained in basic construction skills, such as carpentry, welding, plumbing and electricity, enabling them to maintain the houses and basic infrastructure that were rehabilitated under the project.

The Mayor of Ramadi, Mr. Ibrahim Al-Aosaj, commented that as one of the first UN agencies to enter and operate in Ramadi, UN-Habitat’s work has been very important for local communities. One of UN-Habitat’s activities was to establish community-based committees comprised of women and men from Tameem and Kilo 7. These communities played a pivotal role in planning and implementation of the activities. In addition, the committees were empowered to decide on training activities that would help them maintain the rehabilitated houses and infrastructure.

One of the participants of the program is Ahmed Salih, a 28-year old breadwinner for a family of eight that fled the city because of ISIL’s occupation. When the city of Ramadi was liberated from ISIL in 2016, Ahmed and his family were eager to return to Ramadi, but found their house damaged as a result of the military operations. Without a decent place to live, the family had to return to the IDP camp in Ameriyat Fallujah. UN-Habitat’s urban recovery programme and its community-based committee helped Ahmed to engage in discussion and planning for recovery of Tameem neighborhood. Ahmed himself was hired to rehabilitate his house, not only helping his family to regain comfort and safety but also to earn a living. Ahmed also participated in technical trainings conducted by UN-Habitat and its local NGO partner Al-Karam enabling him to maintain and rehabilitate his house in the future. Back in Ramadi with his family, Ahmed is now hoping to help vulnerable women who lost husbands and fathers with housing rehabilitation. Including Ahmed’s family, a total of 723 families (3,419 individuals) benefitted from this intervention, making possible a safe, voluntary and dignified return to their homes.

Referring to the massive destruction in the city, Mr. Ali Farhan, the Technical Deputy Governor of Anbar, stressed the importance of the project: “UN-Habitat’s reconstruction activities in Ramadi are highly appreciated as they enable the return of displaced people. The Governorate urges UN-Habitat to extend this kind of work to more neighborhoods”. Mr. Fumio Iwai, Ambassador of Japan to the Republic of Iraq, commented: “It is our pleasure that Japan has contributed to reconstruction of two neighborhoods in Ramadi City in cooperation with the Government of Iraq. I am very impressed with the efforts made by people who were forced to leave their homes, and their accomplishments in the reconstruction of their homes and their lives.” 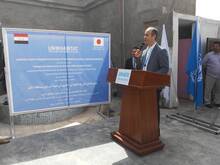