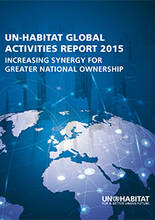 The Global Activities Report 2015, takes into account the progress made in addressing UN-Habitat’s projects portfolio with a view to increasing its impact and facilitating national ownership. An encouraging trend during the current reporting period is that the earmarked portfolio has continued to grow, confirming rising demand for the Agency’s technical expertise.

This upward trend, consistent with UN-Habitat’s strategy to expand its earmarked projects portfolio, has been sustained, from a level of USD 136 million in 2012, to USD 171 million in 2013 – representing a 25 per cent increase, and to USD 172 million by November 2014.

These contributions have enabled UN-Habitat to provide strong support of more than USD 162 million in 2014 alone to 16 countries in sub-Saharan Africa, 18 countries in Asia and the Pacific, 9 countries in the Arab States region, and 19 countries in Lati America and the Caribbean, in addition to regional programmes and normative global initiatives.