UN-Habitat celebrates a decade of work in Kuwait

Kuwait City 19 February 2018—As part of events marking 10 years of its work in Kuwait, UN-Habitat has signed an agreement with the Boulevard which is under the Al Salmiya Group for Enterprise Development Company which to host celebratory event on Public Space March 15th and 16th in Kuwait City.

This year’s celebrations to be held at the Boulevard Park under the theme, “Public Space for Peace”, is an event intended to bring together communities to celebrate and appreeciate Kuwait by having an “International Tasting Bazaar” and celebrating the importance of having an open public space around Kuwait districts that is socially engaging and impactful.

Boulevard Park is considered Sustainable due to its multipurpose setting for park goers having a library, shopping mall and restaurants with beautiful open out-door space which creates a sense of holistic well-being for guests to conduct and enjoy their daily activities.

The park has been selected due to its commitment in promoting and achieving the Sustainable Development Goals specifically SDG 11: Sustainable cities and communities advocating that a well-planned city-wide public space systems with natural green areas that are well connected can create networks to regenerate ecological systems and tackle challenges posed by climate change.

The UN-Habitat and Boulevard cooperation aims to bring people together. It represents the culmination of the cooperation between private sector and UN organizations along with participation of all sectors of the society. Bringing in cultural diversity by enriching residents experience in a variety of international food dishes, representing different regions of the world, and achieving creating cross-cultural friendships.

Mr. Al Adwani, Chairman of Al Salmiya Group said: “bringing forward this initiative to Boulevard aims to raise awareness of the importance of having an open public space around Kuwait districts that helps to achieve a compact, connected, integral and inclusive future cities”.

United Nations Resident Coordinator Mr. El-Sheikh, further added, “this is part of our mandate to update and inform all residents of Kuwait on the international pillars of what makes a community sustainable by promoting both the New Urban Agenda and the Sustainable Development Goals (SDGs) “.

In order to generate more awareness of what is ‘open public space,’ a youth competition will run simultaneously during the second day of the bazaar geared to students in private schools who offer the UN curricula to showcase their creative talents in either drawing or design a model of what they need and want in the sustainable “My Future City Model” competition.

Mr. Adwan added that Boulevard Park was designed in a way to promote a unique offering of a mix of in-door and out-door services, activities, and facilities to empower families by contributing to the local community and making it accessibly convenient for both families and kids.

Strategically located at the heart of Salmiya, Kuwait’s most vibrant district, Boulevard stands as an urban hub for recreational, social, commercial, natural, and touristic attractions in which visitors can enjoy an array of activities.

Mr. Al-Hassan, the acting head of UN-Habitat office stated that as a shopping mall with an open space, Boulevard provides its shoppers with a multipurpose park, where each family member enjoys a safe and environmental friendly open space, the youth can also practice sports and intellectual activities which leads them to become a more creative and productive generation, and that in its essence achieves the UN-Habitat New Urban Agenda objectives and at the same time it achieves the economic growth of the city.

Al Hassan, further added that “the interesting part is that Boulevard design places in consideration of all kinds of shopper’s access requirements including infants, people with special needs and elderly making it easier for nearby commuters”.

El-Sheikh emphasized, that UN role we are tasked to help raise awareness and create a place that empower residents to be involved in decision making process’s in order to meet their general demand as set by Agenda 2030.

Messages from “Public Space for Peace” celebration will promote the five pillars of what makes a Sustainable Public Space  :-

It is worth mentioning, the collaboration between UN-Habitat and Boulevard will educate and inform ‘youths’ about the benefits of public space for sustainability and how this plays a strong impact for societies to thrive in Kuwait. Teaching residents and youths the added benefits of having an open public space and investing more into attractive outdoor communities are 50% more likely to achieve high levels of walking which help slow global warming and its role to shape urban development communities.

Dalal Al-Radhi, Partnership & Advocacy Associate at UN-Habitat ended by saying, Green public space must be a key consideration in urban planning for the health of the city and its people, considering world’s most famous cities are known for their open space as for their culture such as, Barcelona La Rambla tree lined pedestrian or the Bukit Timah Nature Preserve in Singapore. 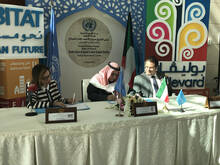