The discussions focused on the Vienna City Hall’s 25-year history of promoting women’s issues and gender mainstreaming in urban planning, city administration/management, health, violence, city legislation, gender budgeting, and labour market issues. Focus on gender equality within Vienna City Hall began in 1992, with the instalment of the Gender Mainstreaming section and the Women’s Office at the senior level in order to make sure that gender became a cross-cutting issue across the city administration.

As a result, Vienna City Hall represents a strong body of best practices in the field of gender mainstreaming in cities; nonetheless, the representatives from the Vienna City Hall expressed their interest in learning from other cities, particularly those in the developing world, which they hailed as having instituted innovative approaches in the face of reduced funds.

The Gender Mainstreaming section (located at Chief Executive Office, Executive Group for Organisation, Safety and Security) is in charge of making gender issue a cross sectional issues throughout the whole city administration and looks at a number of initiatives, at the policy level, with consideration of women and girls and men and boys. Namely, within the City of Vienna, District 12, stands as a best practice of the implementation of gender-responsive budgeting.

Women’s Health and Health Targets is working on a number of streams, which include gender-based violence, securing quality maternal health, and considering the particular realities of elder populations. The team strongly aligns its outputs and outcomes with SDG3, SDG5 and SDG10. The Department for the Promotion and Coordination of Women’s Issues is presently working in the realm of education, and adolescent girls, so as to secure success toward SDG 4 and SDG 5. The Department for Economic Affairs, Labour and Statistics is focusing primarily on economic gaps and outcomes for/across the city’s population, examining time-wealth, pay gaps, and pension gaps from a gender perspective. Their work is strongly aligned with SDG5 and SDG8, and demonstrates both robust quantitative and qualitative methodologies.

Moreover, the Executive Group for Construction and Technology, Competence Centre overall urban planning, Smart City Strategy, participation, gender planning has undertaken a number of gender mainstreaming projects across the city, primarily visible in Districts 6. Within this District, a number of gender mainstreaming projects have been undertaken, focusing on modes of transport, public spaces, and safety. The Group also focuses on how to successfully recruit gender mainstreamed plans into urban planning and architectural competitions for the city. Their work strives toward SDG11 in line with a number of climate mitigation strategies.

The meeting serviced as a best practices and innovations exchange, with the GEU sharing examples from other municipalities, as well as recording the accomplishments of Vienna City Hall for future knowledge-sharing.

The GEU looks forward to future exchanges with the Vienna City Hall and working toward more extended knowledge sharing on gender mainstreaming in cities. 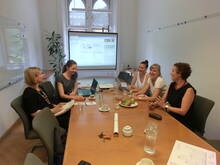