Goma, 15 June 2015-- UN-Habitat and the Office of the Special Envoy for the Great Lakes are piloting a project aimed at addressing the many challenges facing young people in the region. The overall goal of the Youth Centres for Peace Project is to contribute to the promotion of programmes that address Youth unemployment through infrastructure development and investment promotion in the Great Lakes Region specifically targeting the border towns.

Among the project’s specific objectives are to create bridges and build confidence between youth in bordering communities between the Democratic Republic of Congo on the one side, Uganda, Rwanda and Burundi on the other. Phase one of the project will focus on facilitating the development of a start-up programme for the Goma Youth Centre for Peace, with the assistance of similar centres in Rwanda.

Towards this end, a mission was recently undertaken by UN-Habitat with the goal of meeting various stakeholders in preparation for the establishment of Goma One Stop Youth Livelihood Hub. One of the recommendations of the mission from Goma was to organize exchange visit between officials from the Ministry of Youth in Kivu North Province Goma to the One Stop Centre in Kigali to understand the operation of the Centre in Rwanda and the involvement of government in its sustainability.

Last week in Kigali, a UN-Habitat team led by the Habitat Programme Manager Ms. Monique Sevumba, and the coordinator of the Kimisagara One Stop Youth Centre Mr Emmanuel Bigenimana facilitated the delegation from Goma North Province, Mrs Adèle Bazizane Maheshe ( Minister of Education, Youth ,Gender and Children), Mr. Guy Kibira Youth Representative, ICGLR Youth Forum and her team to meet the Minister of Youth and ICT in Rwanda, Mr. Jean Philbert Nsengimana and the Permanent Secretary in the same Ministry.

They also toured the facility and had presentations from the host. UN-Habitat and the Office of the Special Envoy are part of the One UN regional programme on the great lakes. The Special Envoy’s Strategic Roadmap 2015-2017 identifies mobilizing women, youth and civil society, in the Great Lakes region as one of nine priorities. It encourages building constituencies among different groups around the Peace, Security and Cooperation Framework (PSC) and promoting a shared vision of peace and prosperity in the region.

This joint O/SESG-UN Habitat project “Youth for Peace Initiative” is a pilot that will expand further as part of the One UN Regional Program. It follows up on discussions between the Special Envoy and UN Habitat in September 2014, and recommendations for O/SESG to team up with and support UN organizations to implement the PSC Framework with bottom-up projects in DRC which will be subsequently scaled up regionally. 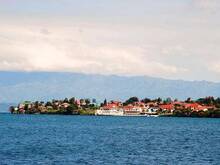