UN-Habitat and Red Cross To Partner on Post-Disaster Housing

Sendai, 19 March 2015 – UN-Habitat and the International Federation of Red Cross and Red Crescent Societies (IFRC) have signed a Memorandum of Understanding that they will work together on promoting adequate shelter and settlements for all, with a focus on people affected by natural and man-made disasters.

The agreement, which was signed at the World Conference on Disaster Risk Reduction taking place this week in Sendai, Japan, outlines the commitment of the two international organisations to collaborate through linking humanitarian shelter with longer term housing and urban development in the aftermath of disasters. IFRC, whose expertise lies in providing emergency shelter and coordinating initial disaster response, will look to UN-Habitat to provide urban planners and shelter recovery specialists as part of its inter-agency shelter coordination teams.

UN-Habitat, as the United Nations housing agency, will involve IFRC in advancing housing and urban policy and advocacy through events such as the biennial World Urban Housing Forums organised by UN-Habitat. Speaking about the partnership, UN Under-Secretary-General and UN-Habitat Executive Director, Dr Joan Clos said: “We are pleased to be working with the IFRC in this important area of work. The transition from emergency humanitarian shelter provision to longer term urban reconstruction and development is vital to ensuring the creation of socially, economically and environmentally sustainable human settlements.”

“Our partnership will engage with governments and municipalities for a better urban planning to meet the needs of communities.The MoU signed today is an important milestone in our common efforts for healthier, safer and more resilient communities,” said Elhadj As Sy, IFRC Secretary-General

In addition, both parties will work to highlight the issues of disaster risk reduction and response raised at regional housing conferences such as the World Urban Forum on global development platforms more widely, such as the Global Housing Strategy 2025 and the United Nations Conference on Housing and Sustainable Urban Development – Habitat III – set to take place in 2016. The agreement is in recognition of the potential in which the expertise of both organisations can complement each other for increased value for money and improved service delivery to those in greatest need.

With the IFRC’s 2011 International Red Cross and Red Crescent Conference mandate from states to address the regulatory barriers to the rapid and equitable provision of emergency and transitional shelter after disasters, combined with UN-Habitat’s country level activities and studies addressing housing, land, property and the regulatory environment, it is hoped that shelter for the victims of disasters can be provided efficiently and effectively, both in the immediate aftermath and in the longer term. 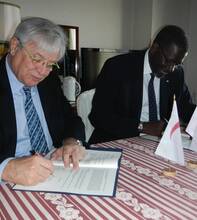