The parties discussed the importance of building resilience and for the Port Vila Municipal Council (PVMC) to lead in addressing problems affecting Port Vila including climate change, natural hazards, and the growth of informal settlements.

While initial engagement between the PVMC and UN-Habitat has started with data collection and a workshop in Port Vila in September, the LoA represents an official commitment from both parties to fully implement the CRPT. The implementation will conclude with recommended actions, collaboratively developed, focused on making Port Vila more resilient. 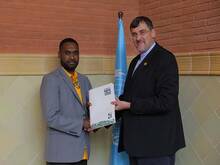