UN-Habitat and partners in urban regeneration in Mexico City

Mexico City, 25 August 2016—Studies have showed that complex urban dynamics that respond to high land prices and lack of affordable housing in the center of the cities are forcing residents of large metropolis to relocate sometimes even 2 hours away from their jobs.

According to the same studies, this state of affairs is having dreadful consequences for many of the world’s cities. On the one hand, city centers are being emptied of residential uses and therefore often becoming degraded and unsafe areas. On the other hand, low dense peripheral developments enormously reduce economic productivity of the city, promoting unsustainable development patterns that rely on cars instead of public transport and increase the energy consumption and carbon footprint of our daily activities.

These low density growth patterns are very costly in terms of infrastructure provision as well as financially nonviable, as basic services such as public transportation cannot be afforded at such low population densities. To address this recurrent Latin American cities’ challenge, the Urban Planning and Design Lab of UN-Habitat and the UN-Habitat Office in Mexico are collaborating with a team of four urban planning offices funded by the Dutch Creative Industries Fund and under the supervision of SEDUVI (Secretary of Urban Development and Housing), to develop a spatial, economic, social and financial pilot project for the regeneration of the Colonia Doctores, located in the central area of Mexico City.

The area, currently a low dense urban area with public space deficiencies and negative social dynamics, has a huge potential to develop into a connected, more compact, socially inclusive and resilient neighborhood that ensures the presence of current social groups in the area.

During the last 6 months, the project team has analysed the complexity of the social, financial and legal framework of Colonia Doctores to propose a regeneration strategy that is based in three main pillars:

The next step of the project will be the presentation of a 2 year proposal to address the regeneration of Doctores based on the three described pillars. The collaboration between UN-Habitat, Creative Industries and SEDUVI will be presented in the Urban Planning and Design LAB event that will take place during the Habitat III Conference in Quito on Monday the 17th of October 2016. 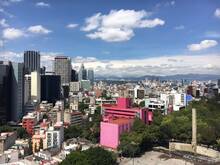