Mexico City, 24 March 2016 – Top officials from UN-Habitat and the Lincoln Institute of Land Policy signed an agreement in Mexico City this month to create a pilot for a global municipal fiscal database that will result in the reporting of fiscal data for select cities in Asia, Latin America and Africa. The signing ceremony was attended by Dr. Joan Clos, Executive Director of UN-Habitat, and George W. McCarthy, president of the Lincoln Institute, and Marco Kamiya, acting coordinator, Urban Economy and Finance Branch of UN-Habitat.

The work on the global municipal fiscal database will be led by Lourdes Germán, from the Lincoln Institute, in coordination with Mr. Kamiya. Dr. Clos underlined the importance of municipal data for planning and good management toward the New Urban Agenda and the integrated “three-pronged approach” that links planning, municipal finance and legal frameworks. McCarthy emphasized the synergies between both organizations as well as the need to produce indicators as a base for policy advisory services.

The fiscal health of municipal governments is critically important to the successful implementation of the New Urban Agenda and the United Nations Sustainable Development Goals focused on making cities and human settlements inclusive, safe, resilient and sustainable. Increasing access and transparency with respect to fiscal data is critically important to enabling the interventions that protect cities before fiscal stress degrades public services, endangers infrastructure, or devolves into a municipal bankruptcy. This project will introduce a critically important new online resource to academics, leaders of cities, private sector stakeholders, and others who want to understand the data related to the fiscal health of municipal governments and identify policies that can improve city finances.

It is intended to support research and planning professionals charged with assessing the costs and benefits of urbanization, planning for the expansion and extension of cities, and undertaking economic development activities within cities. As part of a campaign to promote municipal fiscal health, the Lincoln Institute has been working closely with the United Nations and stakeholders in preparation for Habitat III, a UN conference in October in Quito, Ecuador, where member states will adopt a New Urban Agenda for sustainable urban development. 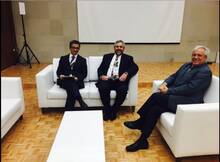