Fortaleza 9 June 2015-- UN-Habitat and the Brazilian state of Ceare have signed an agreement on social and urban development.

Under the terms of this agreement, the work will be in the towns that are near the Industrial and Port Complex of Pecém (CIPP), in the state of Ceará, Northeast Region of Brazil. The agreement, signed last week in the city of Fortaleza, offers integrated planning and work in a short, medium and long term using a pilot method developed by UN-Habitat. "The method works seamlessly purposive social and environmental development," said the governor of Ceará, Camilo Santana

The document includes monitoring and the social & urban planning of the municipalities impacted by large enterprises. "It's a successful model used in many cities around the world. We will replicate the positive actions in our cities ", stated Governor Santana.

"What I see here is a déjà vu of what I happened in Medellin, five years ago, when we did a similar job. I see in Ceará a work with great potential for socio economic and environmental development," said UN-Habitat Regional Director for Latin America and the Caribbean, Elkin Velasquez. 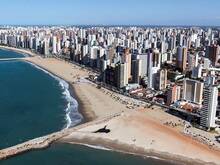