Kabul, 15 December 2015 - At a ceremony held in Kabul the Government of Afghanistan and UN-Habitat over the weekend officially launched the 'Future of Afghan Cities Programme'.

The programme is supported by Australia and the United Kingdom and will focus on the development of a National Urban Priority Programme (U-NPP) and undertaking a detailed analysis of five main city regions and 20 strategic district municipalities.

While the UK is not a new donor for UN-Habitat, it has been many years since the UK funded UN-Habitat Afghanistan. Speaking at the event, Chris Austin, Country Director for DFID, noted that cities present both challenges as well as opportunities, especially for youth and women. Mr Austin highlighted the importance of a national urban development framework to harness cities as drivers of development and UN-Habitat's role in supporting the government advance the national agenda.

Mrs, Shireen Sandhu, Head of Aid at the Australian Embassy in Kabul, noted Australia's commitment to providing the Afghanistan government technical support through UN-Habitat based on the successful experience from the previous funding round.

The FoAC programme follows on from the successful State of Afghan Cities Programme (SoAC) which was launched by the President of Afghanistan in November 2015. SoAC undertook a detailed assessment of all 34 provincial capitals in Afghanistan in terms of land use and housing, including by harnessing local knowledge through city workshops as well as innovative GIS-based technology. 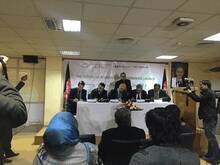