Nairobi 27 August 2016 —The 6th Tokyo International Conference on African Development (TICAD VI) opened in Nairobi on Saturday with heightened optimism that it will help unlock Africa’s full development potential. This optimism was not misplaced considering that the government of Japan pledged to give some USD 10 billion towards infrastructure development in the African continent.

Furthermore the Prime Minister Shinzo Abe promised to kick start measures in the United Nations Security Council and have an African country get a permanent seat in the body by 2023. Mr. Abe said the fund will be used to build infrastructure such as hospitals, roads and energy generation facilities. “Japan is a country that hopes to resolve the problems affecting Africa together with Africa and will not let up,” he said. Speaking during TICAD’s official opening at the Kenyatta International Convention Centre in Nairobi, the Prime Minister said, “UN Security Council is the most powerful body of the UN but there is no African permanent member in it...Japan is also eyeing a similar seat,” he said.

The meeting host, Kenya’s President Uhuru Kenyatta urged leaders to push for fair global trade.He said there is a worrying trend for the developed world to turn inwards, even after benefiting from open trade before. “Indeed, if we look back, the wealthiest countries today with very few exceptions, got rich by trading with others. The critical ingredient of prosperity in the last century has been free and fair trade, infrastructure integration of regions, educated citizens who enjoy economic liberty and responsible governments.

The meeting saw almost 10,000 delegates congregate in Nairobi for the first ever TICAD event to be held outside Japan. Some 35 African heads of state were expected to attend. Analysts had predicted that African participants would be hoping for a new framework that would create a sustainable business and investment environment that could withstand sharp drops in commodity prices and fight escalating threats such as terrorism which hampers growth.

“On the otherhand, Prime Minister Shinzo Abe, who will be attending the conference wants to promote Japanese businesses and push for a bigger share in the last frontier,” the analysts added. The delegates were expected to adopt the Nairobi Declaration on August 28. The document is expected to include pandemic prevention measures and call for high quality infrastructure, a necessary engine for African development. President Kenyatta today said the gathering of close to 30 African Heads of State and Government in Nairobi for development talks signals the collective ambition to build shared prosperity for all Africans.

He said the Tokyo International Conference on African Development (TICAD) process, whose sixth conference Kenya is hosting, is part of Africa’s search for increased opportunities in global trade. “Japan embraced these ambitions in the spirit of partnership, and we agreed to establish TICAD as a vehicle for our collective efforts. This was a visionary step,” said President Kenyatta. He said the global system of multi-lateral agreement on trade and security is under stress due to the actions of some of the wealthiest countries that are now turning against globalization.

“The critical ingredients of prosperity in the last half century have been free and fair trade; infrastructure integration of regions; educated and productive citizens who enjoy economic liberty and responsible government,” said President Kenyatta. “Yet there is now a trend among many countries to turn toward more isolationist or grossly unfair positions on trade,” he added. Prime Minister Abe said the Nairobi TICAD conference opens a new chapter in the relationship between Africa and Japan.

He said Japanese investors will continue partnering with Africans in the continent’s drive for prosperity. The opening ceremony was also addressed by the President of Chad who is also the chairman of the African Union, Mr Idriss Deby Itno, who called on Japan to increase its investments in Africa. 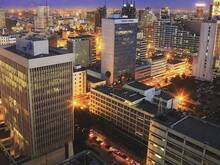