Nairobi, 27 August 2016—A side event at the ongoing TICAD VI meeting saw the importance of integration getting top priority. Officials from Japan’s Ministry of Infrastructure, Lands and Tourism- the organizers of the side event said the integration of land planning and infrastructure especially with transport system, was the way to go if optimum results were to be achieved in urban centres.

This was also the recurrent view of the many presenters who took to the podium during the event at the Stanley Hotel in Nairobi. In his presentation titled "Significance of Integrated transport and land use planning for African Cities", Rafael Tuts Coordinator, Urban Planning and Design Branch, UN-Habitat informed the audience that the urban growth rate of Africa is almost 11 times more rapid than the growth rate in Europe. According to Mr. Tuts, “Cities can be viewed as world’s economic platforms for production, innovation and trade.

Urban area offers significant job opportunities for both formal and informal and in fact cities account for 80 percent of global GDP.” Turning to Africa, Mr. Tuts said secondary cities in Africa were the fastest growing. However, he cautioned, in many cities in Africa, urbanization had not been properly managed and expanding unplanned Cities were deprived of essential public infrastructure. “Cities need to address planning challenges to advance towards a more sustainable development trajectory,” he said.

The coordinator went ahead to demonstrate to the audience how UN-Habitat was working with cities in order to achieve integration of transport planning with land use. Mr. Toshiyuki Iwama, the Executive Technical Adviser at the Japan International Cooperation Agency (JICA) said that his organization supported a seamless approach from policy to project level. He said JICA had developed a concept of a sustainable city.

Mr. Vincent Ogutu said the Government of Kenya recognized the importance of sustainable urban development and gave an overview of urbanization trends in the country since independence in 1963. Other speakers included Ms. Rose Muema from the Nairobi City County Government and Mr. Jabu Salim from the Mombasa County Government. 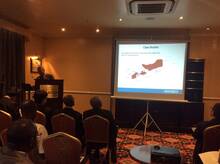