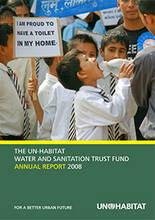 Although sanitation has been hailed as “the most important medical advance since 1840”, over 2.5 billion people – most of them in sub-Saharan Africa and South Asia – lack access to basic sanitation. The world is not on track to meet the 2015 Millennium Development Goal (MDG) for sanitation.

For the drinking water MDG, progress is better, but the situation still critical in some regions. Meanwhile in the slums of cities such as Nairobi, Dar - es - Salaam and Mumbai, the daily reality is an extended struggle to find water, a place to defecate and a convenient location to dump or burn one’s rubbish.