The New Urban Agenda will be decided in Quito

The United Nations General Assembly welcomed today the offer by the Government of Ecuador to host the UN Conference on Housing and Sustainable Urban Development (Habitat III), and decided that the Conference will be held in Quito during the week of the 17 of October 2016.

The objective of Habitat III –the third conference in line with the bi-decennial cycle (1976, 1996 and 2016)- is to secure renewed political commitment for sustainable urban development, assess accomplishments to date, address poverty and identify and address new and emerging urban challenges for the establishment of the ‘New Urban Agenda’.

Since 2009, the majority of the world’s population lives in cities. Today, urban areas are a living combination of history, civilization, diversity and culture. Urbanization has been a force that has changed almost everything: ways of thinking and acting, ways of using space, lifestyles, social and economic relations, and consumption and production patterns. Cities, as economic and productive innovation spaces, provide opportunities for improving access to resources and services, as well as options in the social, legal, economic, cultural and environmental fields. Urbanization has ushered in economic growth, development and prosperity for many.

However, cities are also spaces where multidimensional poverty, environmental degradation, and vulnerability to disasters and the impact of climate change are present. Today, more than two thirds of the global population lives in cities with greater levels of inequality than 20 years ago.

In the words of Dr. Joan Clos, Secretary-General of Habitat III, “the Conference is a unique opportunity for rethinking the Urban Agenda in which governments can respond by promoting a new model of urban development able to integrate all facets of sustainable development to promote equity, welfare and shared prosperity.”

Within the path towards the Habitat III Conference, the second session of the Preparatory Committee will be held in Nairobi, Kenya, from 14 to 16 April 2015; and the third session will be in Indonesia during the month of July 2016. 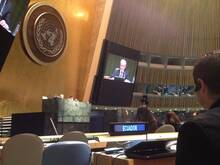