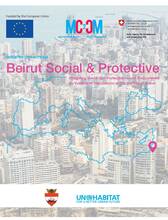 Beirut being the main economic hub of Lebanon, thousands of Lebanese families moved and settled in the city during the 1960s and 1970s. In addition, the city hosts thousands of Palestinian refugees who settled in Beirut following the 1948 Israeli-Arab crisis. With the outbreak of the war in Syria in 2011, Beirut received around 50,000 Syrian refugees who settled within its poor neighbourhoods. With the increase of migrant and refugee population groups, social, safety and security conditions have worsened in the poor neighbourhoods hosting those population groups.

To help address this, one of the Targeted City Actions for Beirut under Mediterranean City-to-City Migration Project (MC2CM) that aims to enhance the engagement and commitment of the Municipality of Beirut to address social and protection issues encountered by vulnerable populations settled within the poor neighbourhoods of the city is the establishment of the "Municipal Social Cell" (MSC). The MSC is working closely with local civil society organizations active within the poorest neighbourhoods of Beirut to identify key issues, gather needed data, and propose solutions to be adopted by the Municipal Council.

The MSC is supporting the Municipality of Beirut to better target and mitigate such issues encountered by migrant and refugee groups as well as poor host communities. This is achieved through raising municipal awareness on urban migration issues taking place in the mentioned neighbourhoods. The “Municipal Social Cell” to be established under this MC2CM Targeted City Action  liaises with relevant local community-based organizations (CBOs), non-governmental organizations (NGOs), focal persons, and other stakeholders to identify and implement priority interventions based on reliable data gathered by CBOs and NGOs within targeted communities.

Read the Municipal Social Cell brochure to find out more.