Johannesburg, 19 September 2017 – UN-Habitat and its partners are exploring how “mixed reality” can be used to boost community participation in planning urban public space.

Over the last few years, UN-Habitat has increasingly been working with digital tools for sustainable urban development, often in collaboration with technology partners.

Since 2012, the organization has been working with Mojang, the company that makes Minecraft, on Block by Block, a programme that uses Minecraft as a community participation tool in the design of urban public spaces. Minecraft is one of the world’s most popular video games, best imagined as a simple 3D modelling tool, which has over 100 million users worldwide.

The project builds public spaces in Minecraft, provides design training to citizens and then gives them the opportunity to redesign the spaces in the game and present their ideas to local government decision-makers. The methodology has proven remarkably successful and has been used in more than 30 cities worldwide, including Nairobi, Accra, Mumbai, Hanoi, Pristina, Mexico City, Lima, Cairo and Gaza.

At the same time, UN-Habitat has been working with technology company Ericsson’s Strategic Design unit, to investigate how ICT can contribute to urban social change. One such project, Maji Wazi, explored how basic water sensors and crowdsourced data could support access to water in Nairobi’s slums. It built on a previous activity which had the scope to develop a number of tangible concepts to frame discussions about the potential relations between future mobile networks and urban prosperity in Nairobi.

Bringing mixed reality to the mix

Now these two collaborations are coming together as part of Building the Public City Through Public Space, a Johannesburg Development Agency, UN-Habitat and Wits University project to improve public spaces in Johannesburg. UN-Habitat arranged a pilot workshop during the Fak’ugesi Festival in Johannesburg in order test how “mixed reality” could be used as an additional component in the Block by Block process.

In the context of urban planning and design, this could mean virtual buildings being partly occluded by real buildings and trees, or vice versa, or having the asphalt in a public space change to grass, or making some infrastructure transparent to be able to see behind it.

Ericsson’s Strategic Design Lab are developing mixed reality applications that enable these experiences on a city-scale; instant, mobile, in real time, and with a very realistic experience. Many of the current virtual and augmented reality devices have sensors with a limited range or require a setup with tracking devices, which makes them limited to indoor environments or specific locations.

Ericsson Strategic Design think that this means that one key component for a city-scale mixed reality platform is a 3D model of the city, which can serve as a reference for precise device positioning and realistic rendering of digital objects. Some cities have already started developing these.

Over three days, students from nearby Rosebank College and Wits University worked with residents, passers-by and Faku’gesi Festival participants to use Minecraft to crowdsource and co-create design ideas to improve Eland Park, a public space in Braamfontein, inner-city Johannesburg.

Minecraft is an effective tool to enable non-professionals to quickly sketch out urban design ideas in 3D and present them to professionals and city authorities. The ideas from this workshop were varied and focused on improving safe access across the busy Bertha Street, pedestrianising Stiemens Street, increasing security and providing seating and activities for the hundreds of students who regularly use the space.

Once the participants finished designing in Minecraft, the Ericsson team exported their creations to a mixed reality prototype application, building on a detailed 3D model of the public space. People could then go outside and, using special smartphones with 3D-sensors, view their Minecraft designs in real life, including walking around the digital objects out on the street as if they were physically present.

An urban designer from Wits then interpreted the needs and ideas that people expressed through the Minecraft process and designed a first 3D proposal for improving the site. This could also be viewed through the mixed reality platform.

UN-Habitat, the Johannesburg Development Agency and Wits will now work together to physically implement some of the ideas that have come out of this innovative community participation process. Work is expected to be completed in 2018. We are also very excited with the possibility of continuing to experiment with mixed reality and collaborative urban design. This is very much new technology under development, but clearly has many possible applications in the urban development field, for example making citizen participation processes more inclusive and accessible. 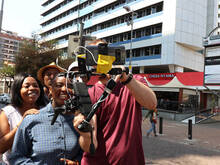 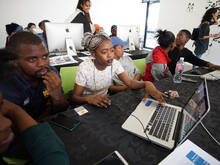