Kathmandu, 3 August 2015 – Martha Ramtel, 41, who lost her husband fifteen years ago and also lost her father, who has been assisting her since then, during the devastating earthquake in April this year, comes from a Dalit family in Dumin Danda village, in Sindhupalchowk district, Nepal. Living with her four small children she works as a labourer and also sells buffalo leather as raw material to local entrepreneurs. The food grain she produces is only sufficient for three months in a year.

Encouraged by the material support provided by the temporary shelter project implemented by UN-Habitat in partnership with a local NGO, Community Development and Environment Conservation Forum (CDECF) in her village and pressed by the urgent need keep her family safe from the monsoon rains, she built a temporary shelter.

She has also used locally available construction materials like bamboo, wood and stones. Not only her shelter is technically sound, she has also built a temporary toilet. She has set an example in her community that single-woman, with adequate support, can build safe and appropriate shelter. In Nepal, Dalits are socially discriminated and economically marginalized. They are one of the most vulnerable populations with limited coping capacity.

Shelter provision for the monsoon

After more than 500,000 houses were either damaged or destroyed during the recent earthquake in April 2015, the Government of Nepal appealed the international community to support country’s emergency shelter needs.

These needs were particularly vital with the coming monsoon season, in order to avoid protracted risks, particularly for the most vulnerable people including women and children.

In response, the Government of Japan decided to support UN-Habitat’s humanitarian response for shelter provision. The support is being mobilized across 10 priority neighbourhoods in five of the most affected districts; Sindhupalchowk, Dolakha, Kathmandu, Lalitpur and Bhaktapur.

This project will provide material support for communities in building 1600 temporary shelters and operate ten Community Information Centers, two in each of the five selected districts. The kiosks will serve as an information hub for communities seeking technical information on ‘building back better and safer’. 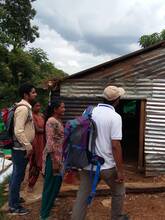