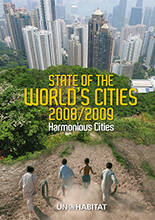 Half of humanity now lives in cities, and within two decades, nearly 60 per cent of the world’s people will be urban dwellers. Urban growth is most rapid in the developing world, where cities gain an average of 5 million residents every month. As cities grow in size and population, harmony among the spatial, social and environmental aspects of a city and between their inhabitants becomes of paramount importance. This harmony hinges on two key pillars: equity and sustainability.