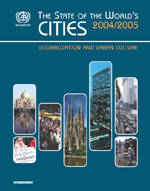 The State of the World’s Cities 2004/2005 charts the progress and the challenges we face in this rapidly urbanising world. With contributions from some of the world’s leading urban scholars, writers and experts, this report carries extensive examples, illustrations and facts that are of use to experts and non-experts alike. First published in 2001, this flagship report of UN-HABITAT now published every two years, represents a further milestone in the efforts of the United Nations to gather, promote, and disseminate information for policy makers and the public at large.