Rio de Janeiro 31 August 2015--Representatives of UN-Habitat and the State of Rio de Janeiro have signed an agreement on sustainable urban development.

During the ceremony, the governor of Rio de Janeiro, Luiz Fernando Pezão, and the Director of the regional office of UN-Habitat in Latin America and the Caribbean, Elkin Velasquez, made a commitment to promote actions and projects for the benefit of urban and metropolitan governance.

The agreement also seeks to encourage the debate on the challenges of urban development, as well as the design and implementation of projects that can influence public policies on urban and metropolitan issues, and systematize and disseminate good practices on the matter.

"The agreement addresses the provision of technical cooperation to promote the participation of the state of Rio de Janeiro and their cities in the preparatory process for Habitat III, the third UN conference on housing and sustainable development, which will be in October next year in Quito, Ecuador," said Elkin Velasquez.

Besides reporting on the Habitat III Conference at city level, the agreement also contains plans to launch studies and pilot projects on sustainable urban development, as well as the implementation of the New Urban Agenda and UN-Habitat’s urbanism principles in the local context. 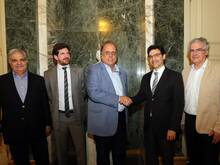