Asker, Norway 18 December 2014 - "Youth less governance is useless governance.” This was the rallying cry that delegates at the Asker Conference on Youth and Governance held in Norway last month came up with. It was the brainchild of Stian Seland, President, Norwegian Children and Youth Council (LNU), galvansing those present to clamour for more engagement of young people in day to day governance in their respective countries. The goal of the conference was to explore best practices in engaging youth in governance.

UN-Habitat, in partnership with the Asker Municipality and (LNU), convened the conference on the anniversary of the inauguration of the Youth 21 initiative which was held in 2011 in Oslo, Norway. The focus of Youth 21 is to research and work with partners to establish mechanisms to better engage youth in all levels of governance. Through this model of "multilevel governance", Youth 21 was able to work with member states, youth-led civil society and the Secretary General's office to establish the Secretary General´s Envoy on Youth, of whom Ahmad Alhendawi is now the current Envoy.

The Asker Conference was opened by the Crown Prince of Norway, Haakon Magnus who spoke on the role of youth leadership globally. "When young leaders come together, like you do here today, you can bring out the best in each other," stated the Crown Prince in his opening remarks. "The world is dependent on the energy, creativity and stamina of young people to create the future that we are all hoping for. Youth’s participation in, and access to, decision-making is important to create social change. By involving youth, we help them to bring out their potential – and thus create a better future for all of us. ” In his video message the Secretary-General´s Envoy on Youth focused on the positive force for change youth can be in making policy and engaging in governance. "Youth today are global citizens and are highly interconnected through various platforms," stated Alhendawi, "They have the dynamism and creativity to give substantial contributions in policy making and governance, not only at the local and national levels, but also at the international levels." Read the full Opening of the Asker Speech

The Deputy Executive Director of UN-Habitat, Aisa Kacyira, outlined in her opening remarks to the conference the need to assure that both young men and women are engaged at all levels of governance, and that often, it is local government where youth first interact with governance and governmental institutions. "We at UN-Habitat believe that youth must have a meaningful say in governance.It is indeed not only a right, it is as well critical to sustainable development, at the local, national and international level," stated the Deputy Executive Director," We cannot ignore and not fully engage this important and dynamic demographic, especially in the global south where people under the age of 30 represent up to 70% of the population." “We insist that youth participation starts from the grassroots, the local level, to the regional level, to the international bodies.

The youth have been speaking, it is about time that voice is heard at a UN level by creating an institution of listening to the young people.” Ms Zou Kota-Fredericks, Human Settlements Deputy Minister, Government of South Africa. “Far reaching resolutions have been reached here in Asker, particularly on the need for permanent structures and mechanisms within the United Nations system for youth engagement.” Boni Haruna, Minister of Youth Development, Government of Nigeria. “We are very passionate about it and we hope to upscale the commitment by ensuring that we partner with our colleagues across the region”.

Read the full Opening Speech of the Asker Conference on Youth and Governance by His Royal Highness, The Crown Prince. 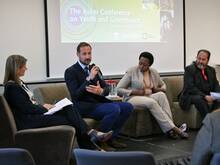