Globally, it is estimated that 80 per cent of the world’s largest cities are currently vulnerable to severe impacts from earthquakes and 60 per cent are at risk from storm surges and tsunamis, making sustainable urbanization a key element of disaster risk preparedness.

In a participative session at the Public Forum of the WCRDD, UN-Habitat Executive Director, Dr Joan Clos, called for the need to change the current pattern of urbanization, as the key instrument for limiting risk generation and contributing to sustainable and equitable development.

“In the next 30 years, the global population living in cities will be doubled. The debate integrating climate change, development and urbanization is one of the big challenges of the 21st Century”, Dr Clos said, speaking in relation to the path towards establishing a New Urban Agenda.

Resilience in the run up to Habitat III

In the session, which discussed policy and implementation of urban resilience, participants and panelists expressed that related commitments made in Sendai will culminate with the United Nations Conference on Housing and Sustainable Urban Development (Habitat III). The Ambassador of Ecuador, HE Leonardo Carrion, welcomed all participants to Quito, where the Conference will take place in October 2016.

The Vice-Minister of Transport and Tourism of Japan, Hon Mr. Kisaburo Ishii, stressed the commitment of the Government of Japan on prioritizing spacial planning and compact structures to make stronger and most live-able cities.  The group of expert panelists presented a wide range of thoughts about platforms of collaborations, infrastructure and governance in the relation between urban spaces and risk reduction for development.

“City resilience is extremely linked to City competitiveness. Those cities that plan are able to become more competent versus others”, said Mr Ede Ijjasz-Vasquez, Senior Director of the Global Practice on Social, Urban, Rural and Resilience at the World Bank. 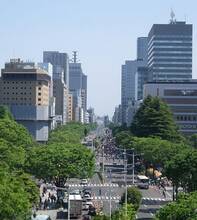