Nairobi, 17 April 2015 – The second Preparatory Committee for Habitat III – the United Nations Conference on Housing and Sustainable Urban Development – has closed with major decisions being taken on process and timing.

Delegates at the Committee confirmed that the Habitat III conference will take place in the week of 17 October 2016 in Quito, Ecuador, while the third Preparatory Committee is scheduled three months earlier from 25 to 27 July in Jakarta, Indonesia. Close to 800 participants from 90 countries attended the important meeting which is the second in a series of three aiming to pin down the detail, aims and objectives of the UN’s sustainable urbanisation conference which takes place every 20 years and will next be held in October 2016 in Quito, Ecuador.

In the next 15 months the focus will be on the finalization of the issue papers, the implementation of the policy units and the organisation of the regional and thematic regions, all feeding into the substantive content of the discussions.

An inclusive platform for partners

During the PrepCom, participants took the first steps in the creation of a debate and advocacy platform for non-governmental in the process of Habitat III, named the General Assembly of Partners.

There was also important contribution by local authorities, who through their international associations and networks met to share their vision and proposals towards an effective contribution to the process. Stakeholders and partners had the chance to discuss the most important topics for the New Urban Agenda in 36 side events while 21 exhibitors demonstrated their work around the world.

Those who could not attend had the chance to follow proceedings by live stream and through lively discussion on social media. Official documents and statements can be found here. 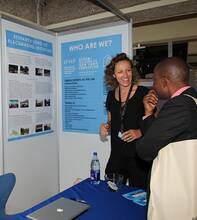