'Science of Cities’ Tool Measures Impact of Cities on People

09 June 2016 - UN-Habitat will release details of a new scientific tool that measures the rate of global urbanization, its characteristics, and the potential effect of urban sprawl on the quality of life for city dwellers. The UN Sample of Cities uses a representative sample of 200 cities worldwide, both in the developed and developing world, to track and interpret trends relating to aspects of urban life as diverse as air and water quality, the time it takes to travel from home to work, physical proximity to employment, housing affordability, and access to enjoyable public space.

Whilst the world continues to urbanize at an alarming rate, understanding just how cities evolve, how that headlong evolution can be managed, and the effect of urban life on humanity has lagged behind. Since 2007, more than half of the world’s population lives in urban centres and cities, and by 2050 as many as 70% of a projected population of 9 billion people will be urban dwellers. The UN Sample of Cities provides open-source data to researchers to draw scientifically valid comparisons between world cities.

This ‘science of cities’ adopts cities as units of analysis and studies them together to discover patterns of similarities and differences, and the consequent impact of urbanization on human quality of life. “Cities, how they form, and the effects of urbanization on the quality of human life must now be treated as a science,” said Dr. Joan Clos, UN Under-Secretary-General and Executive Director of UN-Habitat. “The unprecedented confluence of climate change, population boom, and the rush to live in cities means that our critical human development will take place in cities.

How will we manage this vast change? What secrets do we need to unlock? Does life in a city mean doom or boon for our children and the generations that follow?” The UN Sample of Cities was created, tested, and applied in a series of studies undertaken by a tri-partite collaboration between UN-Habitat, the NYU Urban Expansion Program at New York University, and the Lincoln Institute of Land Policy.

Three additional research programs in this tri-partite collaboration are already making use of the UN Sample of Cities. One program uses detailed satellite imagery analysis to measure the proportion of public and private space, and the quality of the urban fabric. A second uses a network of on-the-ground informants to gather information on the regulatory regimes governing land and housing, whilst a third program measures housing affordability. 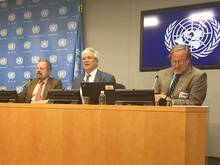