Geneva, 6 July 2016 - UN-Habitat Deputy Executive Director Aisa Kirabo Kacyira has said that urban safety will not happen by accident and requires hard work and action. She made the statement at the opening of an expert group meeting on urban safety in the new urban agenda, organised by UN-Habitat with support from the Habitat III Secretariat, the City of Geneva, the Safer Cities Programme and the Geneva Peace-building Platform.

“I am not sure that we can say we are happy with the progress in the last twenty years,” said Kacyira. “Compared to Habitat II, the world is much more challenged in terms of safety and urban areas in particular.” The expert group meeting, which will run for the next three days, has been organised to feed into the Habitat III preparation process and aims to address the complex and changing dynamics of urban safety challenges and approaches.

In addition, it will explore the promotion of a multi-level governance approach as a long-term sustainable urban crime prevention and safety solutions in the new urban agenda. UN-Habitat’s Director of Project Office, Alioune Badiane also spoke at the meeting saying, “Words will not be enough. We need action”. Laura Bullon from the Habitat III Secretariat explained that the outcomes of the meeting would be fed into the Habitat III process in establishing the New Urban Agenda.

In his keynote address, Mayor of Guadalajara, Mexico Enrique Alfaro shared his personal experience of operating in a city with high rates of organised violence and outlined their nuanced approach to solving the problems in conjuntion with UN-Habitat’s Safer Cities problem which he summarised as “fighting violence with social justice”. 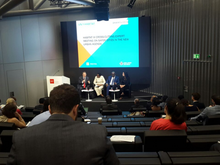