Nairobi, 3 May 2017 - As part of UN-Habitat’s support in the development of a sustainable approach to redevelop the current railway station area in Nairobi - just south of the Central Business District, UN-Habitat hosted a workshop on ‘Financing Urban Development’ at the UN Gigiri Complex which was organized in collaboration with different stakeholders.

Marco Kamiya, ai. Coordinator of the Urban Economy and Finance Branch opened the workshop indicating how Kenya can become the hub of a production networks that spread from Asia to Europe in the 21st century, and how this project in Nairobi can catalyze economic opportunities in Eastern Africa.

Mr. Hiroaki Suzuki, former lead Urban Specialist of the World Bank, stated that the workshop has been a great opportunity to bring together different stakeholders to discuss various elements that the Railway City Project in Nairobi needs to focus on in order to set up a good synergy between all stakeholders.

The Dar-es-Salaam City Council presented their case study of DART system to the audience, providing an opportunity to learn from their experience and to overcome the difficulties in implementing a good Transit System.

A panel discussion was held at the end of the workshop and all the present stakeholders actively participated and contributed to the discussion with their ideas and suggestions on ways to promote sustainable urban development through an integrated and collaborative approach. In general, the workshop demonstrated stakeholders’ commitment to the Railway City Project. 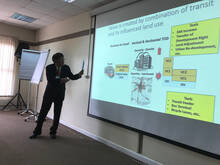