Record downloads of the International Guidelines on Urban and Territorial Planning

Nairobi 13 April 2016--The English version of the International Guidelines on Urban Territorial Planning (IG-UTP) has been downloaded over 100,000 times from the UN-Habitat website, making these Guidelines the most popular publications ever  in less than a year of the date of publication.

To increase awareness and fast-track the adaptation and localization of the Guidelines, UN-Habitat is currently developing a capacity development and learning development package as well as a Country Implementation Handbook.

Professor Bruce Stiftel recommends that “…urban planners should welcome these UN Guidelines as a significant tool to enable us to advocate for better planning structures and programs in our own countries” (Read more).

The Guidelines were approved by the Governing Council of UN-Habitat in Resolution 25/6 of 23 April 2015 and are informed by two years of wide ranging consultations, three Expert Group Meetings and a Compendium of Inspiring Practices. The story on the adoption of the IG-UTP is available here.

Based on twelve universally agreed principles, the Guidelines are intended to be a source of inspiration when reviewing urban and territorial planning frameworks in national and local contexts. They provide action-oriented recommendations to four stakeholder groups: national governments, local authorities, civil society organizations and planning professionals and their associations.

Further, international financial institutions and the international community, as part of their official development assistance commitments, are asked to devote more attention to urban issues, including urban and territorial planning, through increased financial and technical support to South-South, North-South and triangular cooperation, the documentation and sharing of  experience and practices and the development of capacities at all levels.

As a global reference framework, the Guidelines are informing the New Urban Agenda (see Habitat III Issue Paper 8 on Urban and Spatial Planning and Design) and related implementation of the Sustainable Development Goals.

If you want to know more or engage in the implementation of these Guidelines, please contact rmpu@unhabitat.org

The development of the Guidelines benefits from the financial and technical support of the Governments of France, Japan, South Africa and Uganda as well as Cities Alliance, ISOCARP, OECD, UCLG, UNCRD and other UN partners. 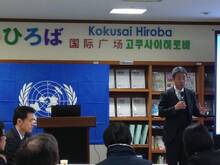