Ramallah, December 19, 2016 - UN-Habitat and its national partner, State of Palestine Ministry of Local Government launched two new publications under the framework of the joint cooperation to defend and advocate for the planning rights of Palestinian communities in Area C of the West Bank that is effectively controlled by the Israeli authorities.

The first publication entitled: ‘Human Rights Impact Assessment Mechanism: Statutory Detailed Outline Plans Prepared by Palestinian Communities in the Israeli Occupied Area C of the West Bank and Submitted to the Israeli Civil Administration’. The mechanism’s objectives are to monitor and assess the contribution of the current spatial planning policy to the realization of human rights of Palestinians in Area C as well as the potential harm of the institutional and operational engagement with the Israeli authorities. Furthermore, the mechanism aims at empowering the Palestinian communities in Area C and the Government of Palestine in challenging the coercive environment they face when initiating planning.

The second publication entitled: ‘National Advocacy Strategy for Planning and Development in Area C of the West Bank (2016-2018)’. The strategy was prepared in a participatory approach through working with an ad hoc national working group composed of the various concerned stakeholders chaired by the Ministry. The advocacy strategy pinpoints the scope and level of interventions needed to foster cohesion and resilience of Palestinian communities in Area C that constitutes more than 60 percent of the West Bank territory. Mr. Mohammad Aljabarin, Deputy Minister of Local Government said: ‘We have endorsed both publications and will make the necessary arrangements to mainstream the mechanism in the plan-making processes in Area C.

Furthermore, we will integrate the advocacy strategy in the Ministry’s work to defend the planning and building rights of Palestinians in Area C’. ‘We look forward to extend our fruitful collaboration with UN-Habitat and local implementing partners in Area C in the near future’ he added. Mr. Zeyad Elshakra, UN-Habitat Officer in Charge in Palestine said: ‘I am pleased that UN-Habitat have supported the Ministry of Local Government in this work.

These publications represent a cornerstone in respecting and protecting human rights in spatial planning initiatives and advocate for a better urban future for all’. ‘This work will contribute in localizing the New Urban Agenda in Palestine’ he added. It is important to mention that the State of Palestine was elected by acclamation as one of the five vice-presidents of the Habitat III Conference - and the only Arabic State-, representing Asia-Pacific States.

The new planning publications have been made possible with the generous financial assistance of the European Union through the Spatial Planning Support Programme for Palestinian Communities in Area C. 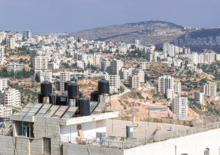