Stockholm 30 June 2015—Some 400 participants gathered in Stockholm from Monday for the third Future of Places Conference – the Public Space Urban Thinkers Campus. Representing more than 300 organizations from 76 countries – along with nearly 10.000 followers on Twitter – the attendees will participate in the Campus dubbed “Public Space in the New Urban Agenda” organized by the Future of Places and set to run from 29 June – 1 July 2015.

The Future of Places is a multi-stakeholder initiative established by UN-Habitat, the Ax:son Johnson Foundation and Project for Public Spaces, bringing together over 500 organizations and more than 1500 individuals. In a multidisciplinary approach, it convenes the leading global thinkers, decision makers, practitioners, civil society and private sector representatives that understand the transformative impact that public space can have in a city and are willing to ensure that public space is at the forefront of the urban agenda.

The Urban Thinkers Campus is an initiative of UN-Habitat, conceived as an open space for critical exchange between urban actors who believe that urbanization is an opportunity and can lead to positive urban transformations. It is also intended as a platform to build consensus between partners engaged in addressing urbanization challenges and proposing solutions to urban futures.

A space for critical exchange

Urban Thinkers Campuses furthermore aim to solicit input into the New Urban Agenda – the main outcome document of the Habitat III conference to be held in Quito, Ecuador in October 2016. They are part of a larger concept on how UN partners and civil society can engage and contribute towards the New Urban Agenda through The City We Need.

The Campus in Stockholm will draw on the earlier experience and knowledge of the Future of Places forum for public space. In joining efforts with other World Urban Campaign partners (Citynet, INU and SDI), the Future of Places Campus will provide a platform for discussing public space in the New Urban Agenda that will be decided at Habitat III in 2016, but also in other important global processes such as the Post 2015 Sustainable Development Goals (SDGs) and the United Nations Climate Change Conference (COP21/CMP11).

This Urban Thinkers Campus will also be an open space for critical exchange between urban actors who believe that urbanization is an opportunity which can lead to positive urban transformations. Through this campus the World Urban Campaign partners have agreed to contribute to the Habitat III Conference by engaging the international community, public, private, and civil society partners to contribute to the new Global Urban Agenda through a consensus document that describes The City We Need. 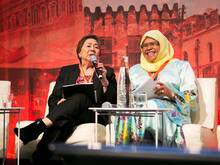 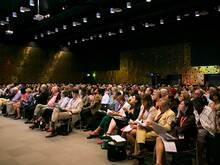