Surabaya, 2 August 2016 – UN-Habitat and the Mayor of Surabaya, Tri Rismaharini, launched a public space joglo – a traditional Indonesian gazebo – in Ketandan, Surabaya. At the launch, United Cities and Local Governments (UCLG) and the City of Surabaya signed an agreement with the Ministry of Public Works to support up-scaling of the public space project and to allocate resources to their implementation. The public space was constructed through collaboration between UN-Habitat, the city government, United Cities and Local Governments Asia-Pacific (UCLG ASPAC) and the community.

At the launch, the Mayor of Surabaya welcomed such activity saying: “The construction of this public space is needed by the people of Surabaya. With public space, brotherhood among citizens can be strengthened.” The Secretary General of UCLG ASPAC Bernadia Irawati Tjandradewi noted that public space in the village is a very important for development because it provides citizens the space to function and flourish.

Kampung Ketan is located in the heart of Surabaya, and is surrounded by historic buildings. The densely populated village has previously been associated with crime, poverty and low education. The public space project has provided the city government with an opportunity to actively engage the citizens in changing this old reputation. Already, there is a new sense of cooperation and solidarity among the village residents. The new joglo will provide a space for the community to meet and interact, a community centre where art exhibitions and other presentations can be performed.

The joglo is named after Cak Markeso, a former well-known public figure in ludruk, a traditional cultural performance. In addition to enhancing unity, the joglo also contributes towards preserving the rich heritage of the neighbourhood. UN-Habitat’s Global Public Space Programme works with local governments, local communities and partners to promote more sustainable urban areas through the creation, design, management and enjoyment of public space. The Programme also develops policies, tools and indicators on public space. 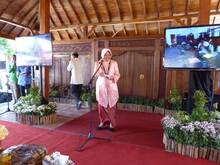