This report was launched at Presidential Palace with all key urban stakeholders in attendance, including the Minister of Urban Development Affairs, the Director General of the Independent Directorate of Local Governance, the Kabul Mayor, Mr. Yoshinobu Fukasawa, UN-Habitat’s Regional Director for Asia Pacific, Australian Acting Ambassador, the UK Ambassador to Afghanistan, along with other Government officials and media.

Speaking at the launch, President Ghani said the State of Afghan Cities 2015 Report "is for better urban planning and policy-making to improve lives, especially of women and youth".  He thanked UN-Habitat for the strong support and emphasized his commitment to develop urban policies and programmes to make cities the drivers of development, a key objective of his National Unity Government (NUG)

Speaking at the launch, the Urban Development Minister Mr. Sadaat Naderi noted "this is a significant achievement for Afghanistan. We now have the first-ever reliable baseline assessment of all our major cities. We thank UN-Habitat for their technical support to make this programme happen, especially in such a short space of time."

In his speech, Mr. Fukasawa, said that “the report is a significant joint achievement for the Government of Afghanistan and UN-Habitat. What I am most proud of is the national-led approach to implementation. The programme was implemented by skilled Afghans, including urban researchers, GIS experts, and others, - many of whom are here today in this room. Thus it was cost-effective and built Afghan capacity and institutions in the process. It represents UN-Habitat's commitment to transform itself in Afghanistan toward building stronger government institutions and sub-national governance to meet the needs of the Afghan population."

The State of Afghan Cities Programme

The State of Afghan Cities Programme (SoAC), was launched in November last year. It was developed and implemented by three key partners: Ministry of Urban Development Affairs (MUDA), Independent Directorate of Local Governance (IDLG), and Kabul Municipality (KM); with technical assistance from the United Nations Human Settlements Programme (UN-Habitat) and financial support from the Government of Australia.

The programme developed an innovative, reliable and cost-effective methodology in order to survey the ‘state’ of Afghanistan’s 34 province capitals. It used recent and high-resolution satellite images to extract key land use and dwelling data. This was combined with field checks and city workshops to engage local stakeholders, improve data accuracy, and build human and institutional capacities for improved urban data monitoring and use.

The report and associated dataset is already being used to inform the Urban National Priority Programme (U-NPP) which is under development. This programme will provide a framework for improving the lives of the poorest and most vulnerable in Afghanistan’s cities in the coming decade.

SoAC 2015 will be followed-up by a second phase, titled "The Future of Afghan Cities". At the event the Acting Australian Ambassador, Dr Joanne Loundes, confirmed "Australia's support of Phase 2 to ensure that the successful urban partnerships and capacity are advanced and that urbanization can be a driver of national economic development and prosperity".

Australia will almost double their contribution from SoAC levels and the United Kingdom will also partner for Phase 2, which will follow a similar methodology and focus on the five key 'city regions'. The data will be essential as inputs into evidenced-based policy and programme decision-making under the Urban  National Priority Programme (U-NPP)

The Report can be downloaded from the following links: 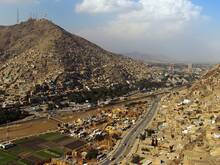