Jakarta, 26 October 2015 —Some 300 young leaders selected from across the region gathered in Jakarta last week to launch the first ever Asia-Pacific Urban Youth Assembly, better known as APUFY. The leaders of tomorrow gathered to deliberate the future of urbanization in the region, setting the urban youth agenda at the 6th Asia Pacific Urban Forum (APUF-6), the Habitat III process and the New Urban Agenda.

The assembly was organized by the Ministry of Public Works and Housing in collaboration of UN-Habitat, Asian Development Bank and UN Major Group for Children and Youth (MGCY) as a preceding event to APUF-6 and Habitat III Regional Meeting. “We are here to answer a critical question at a critical time.” stated Douglas Ragan, Chief, Youth and Livelihoods Unit, UN-Habitat, “Why youth, and why youth and cities?”

In 2007, more than 50% of the world’s population were living in cities, with Asia urbanizing at unprecedented rates. Since the beginning of the new century, Asia has accounted for nearly 65 per cent of demographic expansion of all urban areas in the world. Today, Asia and the Pacific comprise 45 per cent of the world’s youth population, amounting to around 700 million people (and counting).

In regards to youth, according to projections, by 2030 as many as 60 per cent of all urban dwellers globally will be under the age of 18. “Youth play an important role to advise and contribute to development activities. Youth have wider networks and are more innovative in doing activities in their communities and the areas they live in. Besides, more activities and ideas come from young generations.

Lots of new innovations are created by youth groups as they are full of creativity to deal with urban problems and solutions. Youth perspective could add and further push urban development innovation towards youth spirited cities that gathers the needs of young people”, said Mr. Basuki Hadimuljono, the Minister for Public Works and Housing.

Vice Minister of Youth and Sports, Mr. Gatot S. Dewa Broto, highlighted that youth are key leaders in advancing sustainable development, bringing both knowledge, innovation and a new perspective. Basuki Tjahaja Purnama, the Governor of DKI Jakarta (Governor Ahok), built on the Ministers statement, highlighting the need for youth to focus on advancing their communities as well.

“Smart is a must but not sufficient, you must have strong values and work to support your community.” he stated, appealing to the participants to go beyond their own personal needs. In a series of 2 training and 12 parallel sessions during the Assembly, the participants were engaged in the discussions and debated on the challenges and solutions to critical urban sustainability issues.

Some of these included Urban Mobility, Urban Climate, Investing in Youth Innovation, and Mobilizing for Change to name a few. The debates were heated, but consensus on the way forward arose, and a final statement was read to the gathered delegates and government representatives at the closing of the forum. Alfinos Toda, representing the participants of the APUFY extended their appreciation to the organizers for a successful meeting.

“As the leaders of our present and future cities, it is critical that children and youth are given a platform to meaningfully contribute to the formulation, implementation, monitoring and review of the Habitat III process. Our voices and viewpoints are important, and they should shape the New Urban Agenda to make it truly relevant, effective and transformative for the future.” said Toda.

Representatives from APUFY spoke at the APUF-6 Plenary Session and voices of urban youth were reflected in the Chairs Summary of APUF-6 as well as the outcome document of Habitat 3 Regional Meeting. During the reception hosted by the Ministry of Public Works and Housing, participants sang and danced to the drumming by Minister Basuki. 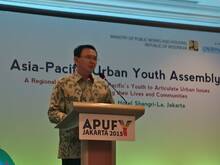 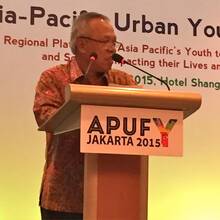 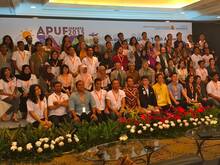