Planning needs to change in the occupied West Bank – UN-Habitat

Ramallah, 21 May 2015 - In a report handed over to Rami Hamdallah, the Palestinian Prime Minister and Nayef Abu Khalaf, the Minister of Local Government today, an international expert group of planners says a new approach to planning could contribute to peace-building.

The expert group examined a sample of ten Local Outline Plans for Palestinian communities in the occupied West Bank, out of around 100 plans that were developed by Palestinian planning consultants since 2011. They report that these are technically sound and adequately specify future land uses and roads, among other infrastructures.

However, only three of the plans have received Israeli Civil Administration (ICA) approval since 2011. The lack of approved plans means that much of the development taking place is unauthorised and at risk of demolition. Poor and vulnerable people face eviction from homes and disruption to their livelihoods.

The expert group of planners, invited by UN-Habitat to review the situation, says that the right to plan should be balanced across all citizens and areas. The group, made up by experienced planners from the UK, Germany, South Africa and Canada, looked at the area known as “Area C” under the Oslo Accords.

The expert group found that the current practice of planning has a restrictive role for Palestinian settlements, while speedily authorising the development of Israeli settlements. Palestinians are denied the opportunities for development that planning should provide.

In the present situation, there are no effective means for Palestinians to influence decisions on the approval of plans for their villages and the procedures and planning regulations that shape decisions are not transparent. A further consequence is that plan-making becomes a protracted process of negotiation, with key documents not available in the public realm in Arabic.

This creates inefficiency for all concerned. The Chair of the group, Emeritus Professor Cliff Hague, a past president of the Royal Town Planning Institute, said “We call on the Israeli Civil Administration (ICA) to considerably improve the pace by which plans are approved. The Palestinian communities in Area C have waited far too long to have plans that provide them with fair opportunities to develop their homes and livelihoods. It could be the start to building trust, and essential step towards a renewed peace process.”

Change as part of the peace-building process

In the report the expert group put forward a number of recommendations including: the ICA working with local authorities to improve the approval process; shifting the focus of plans towards development challenges, opportunities and livelihood, and recognising the special needs of herder and Bedouin communities; completing the National Spatial Plan for Palestine and pressing ahead with regional and sub-regional plans to integrate the planning of main towns and villages in their hinterland.

Issue rural planning policy guidance; and preparing Local Plans for clusters of villages, to expedite the planning process and capitalise on functional linkages. The recommendations address the current situation under Israeli occupation. The Board’s recommendations could be used as part of a transition from occupation, as a step in the peace-building process. In the short term the local outline plans that have been prepared for the Palestinian communities need to be authorised so that they have secure development rights.

Planning for poverty alleviation and development

There also needs to be speedy revision and extension of plan boundaries, and a planning framework from a national spatial plan, rural planning policy, city region plans and local plans for clusters of villages. Such an integrated system is needed to unlock the economic potential of Palestine and help lift communities in area c out of poverty and aid dependency.

The current planning regime in the rural part of the Israeli occupied West Bank makes it almost impossible for Palestinians living there to carry out development. They cannot build houses, small business premises or sheds to keep their animals in. Aid agencies who build schools or health centres risk seeing such essential facilities demolished and towns cannot create new suburbs.

Infrastructure networks are fragmented. In contrast, the planning regime operated by the ICA has facilitated the development of Israeli settlements that are now home to some 340,000 Israelis. Such settlements are widely recognised as being illegal under international law. 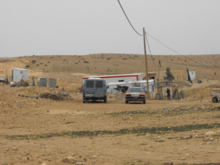