Bangkok 23 January 2017 - Partners from around Asia and the Pacific met in the Thai capital to share and discuss ways in which to implement the New Urban Agenda in the region. More than 60 participants representing 13 countries attended the interactive session which was co-hosted by the Ministry of Social Development and Human Security of Thailand and the Ministry of Local Government, Housing and Environment of Fiji and organised by UN-Habitat.

Speaking at the official opening of the two-day workshop, H.E. Maitri Inthusut, Permanent Secretary of the host Ministry in Thailand, said, “This forum comes at a crucial time for the region as cities here account for 60 per cent of the global urban population.

“We believe that the New Urban Agenda is a concise...action-oriented document”, he continued. “But successful implementation depends on collaboration and partnership among countries….and all stakeholders.” In a statement read on behalf of UN-Habitat’s Deputy Director, Aisa Kirabo Kacyira, the Regional Director, Yoshinobu Fukasawa thanked the hosts for their hospitality and the Swedish International Development Agency for their continued support towards partner mobilization in the region.

Hon Lorna Eden, Assistant Minister of Local Government, Housing and Environment in Fiji gave a powerful keynote address that set the stage for passionate debate around multistakeholder partnerships in the region and localisation of the New Urban Agenda.

Country delegates outlined the work they were doing inside their own jurisdictions and participants heard a presentation on the City Prosperity Initiative - a proposed framework for monitoring , reviewing and reporting on the New Urban Agenda and SDG11. The discussion will continue into day two and participants will also have the opportunity to visit a local slum upgrading project in Bangkok. 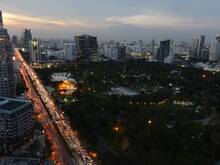