On 13th – 16th November, UN-Habitat kick-started the Public Space Programme in Kalobeyei though a first participatory design workshop with youth from refugees and host communities. In addition to the host community, seven different nationalities were involved in the workshop. The Public Space Programme will establish a network of public spaces designed, implemented and maintained by host and refugee communities, fostering integration the two communities to ensure sense of community ownership and use of the public space.

The first design workshop was organized for designing 2 public spaces: in Kalobeyei Town, by youth living in the surrounding area, and in Kalobeyei Refugee Settlement, by refugee youth. Participants utilized the computer game Minecraft as a tool for 3D design and visualization of the public spaces.

The workshop is a result of the collaboration between creators of Minecraft, Mojang, and UN-Habitat. UN-Habitat’s Public Space Programme has been supporting the engagement of communities internationally in revitalizing their neighborhoods through public space designs. Participants are taught in an engaging and creative way on how to visualize the potentials of public spaces within their neighborhoods. The rehabilitation and revitalization of these two public spaces is funded by Block By Block. Two additional and similar public space rehabilitations and revitalizations project to occur in the coming few weeks as part of the same project.

The workshop begins with an explanatory introduction by Mitiku Woldesenbet from UN-Habitat`s Public Space Programme team, discussing examples of well-equipped public spaces and how they served their communities, and their importance communities including refugee settlements. Participants from the respective communities were then divided into smaller working groups, to familiarize with Minecraft software, spending the remaining days producing final public space designs presented at the end of the workshop. Throughout the process of the workshop, groups were also encouraged to brainstorm on specific challenges to the successful development of these spaces, and the potential solutions that could be adopted to address them.

The final presentation was attended by UN-Habitat, UNHCR, WFP, Local Administration and the implementation partners AAR Japan, sharing the potential facilities and resources that could be used towards public space development. The youth members highlighted on several uses of public spaces that are needed in both refugee and host communities such as community public toilet, seating benches, street lights for improvement of safety, paved foot paths , garbage collectors and garbage bins, , children and youth playgrounds and outdoor sports facilities, and a consensus on the urgent need of implementing green infrastructure along all roads and in the public spaces. The youth also highlighted on the need of free WiFi in the public spaces and job creation in public spaces.

Though the involvement of the youth living in the proximity of the two public spaces, these public spaces will have a management structure that also supports the Kalobeyei Settlement’s transition from a short-term, emergency planning to a more sustainable development model, and to better provide for infrastructure to communities within Kalobeyei, strengthening the integration of Host Communities and Refugees.

Furthermore, public space provides a space for the coexistence and shared cultures, considering the 18 different nationalities living together in Kalobeyei New Settlement, paving the way for reduces conflict between communities and achievement of safe and well used public spaces.

After the end of the workshop, the UN-Habitat team with the AAR analyzed the different proposals from the participants moving towards a quick implementation of the two public spaces project in the first week of December 2017, after completing the working drawing of the two sites, and following the validation workshop with the community. 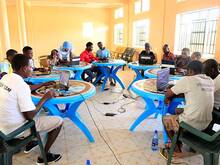