Luanda, 4 November 2015 – To commemorate this year’s World Cities Day, Angola’s Ministry of Housing and Urban Planning organized a two day national celebration on human settlements, key feature of which was the official opening of UN-Habitat’s office in the capital, Luanda.

The event was presided over by the Minister of Housing and Urbanism, José António da Conceição e Silva. Others who spoke at the ceremony included  the representative of Angola’s Ministry of External Relations, the representative of UNAIDS, Sihaka Tsemo, on behalf of the UN Country Coordinator, Paolo Balladelli, and from UN-Habitat Human Settlements Officer, Thomaz Ramalho.

In his speech Mr. Romalho pointed out the strategic importance of Angola for UN-Habitat: “Angola has one of major ongoing housing programme that since 2008 has been at the centre of the national development agenda and is going to be part of UN-Habitat’s Governing Council from 2016 to 2019”.

Minister e Silva highlighted the importance of UN-Habitat in the preparation of a National Territorial and Urban Policy for Angola, “aiming at creating more coordination for current investments on housing and infrastructure within the country in order to promote safer, more resilient, more inclusive and more sustainable cities and human settlements in the country as a whole”.

On 31 October, the ministry organized a presentation of the new General Metropolitan Master Plan for Luanda.

The presentation was made by Neusa Inglés, from Urbinvest, which was responsible for the coordination of the Master Plan, counting also with contributions from other four international consulting firms. The presentation took place at the facilities of the Geodesic and Cartographic Institute of Angola (IGCA). 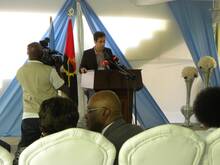 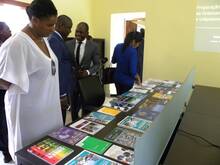