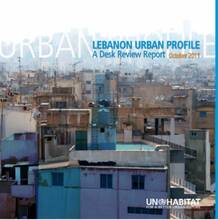 Lebanon Urban Profile.pdf
Abstract
Lebanon is a small country with a total population of 4,223,553 (World Bank, 2010). Recent figures show that 87% of this population currently live in urban areas with the majority - estimated at 64% - residing in large agglomerations mostly in the metropolitan areas of Beirut and Tripoli (UN-HABITAT, 2008). The growth of cities in Lebanon has paralleled the urbanization process that is taking place globally. The conditions generated out of urbanization have a number of universal commonalities.This paper has been prepared to serve as a background paper for the first report on the State of the Arab Cities to be published by the UN-HABITAT, the Arab League and the Arab Town Organization.
Publication Year
2011
Number of Pages
216 pages
Publisher Name
UN Habitat
Publisher URL
https://www.unhabitat.org
Country
Lebanon
We’re rebuilding! If you can’t find what you’re looking for, please check the old website.