Nairobi, 15 July 2015 - UN-Habitat, LSE Cities and the UCLG Committee on Decentralisation and Local Governance, have launched the 2015 edition of the Urban Governance Survey. The initiative, which runs until 30 September, aims to build a global database on current models of urban governance for public dissemination, comparative policy and research analysis.

The Urban Governance Survey explores new and innovative ways of communicating and mapping urban governance to address the ‘data challenge’ on the wide spectrum of different urban governance arrangements that are implemented around the world.

A platform for data collection and analysis

It also establishes a platform for individual cities to identify international urban governance cases that are of particular relevance to their specific situations in order to foster dialogue and exchange of good practice between cities. The initiative’s online platform ‘How Cities are Governed’ contains in depth analysis of existing institutional arrangements and governance challenges faced by cities around the world.

The results for the 1st phase of the survey can be explored through the dynamic and interactive interface and visualization tools. It is hoped that the data collected and its analysis will assist further research and investigation on urban governance.

As the world becomes increasingly urbanized, the urban agenda and, particularly, urban governance challenges also become central issues in global discussions. The survey was first launched in the summer of 2014 and 78 cities from all world regions completed it during this first round.

Initial results of this survey have informed the 2014 Urban Age Conference in Delhi, India which brought together a wide range of policy makers, academics and city experts. In addition, the survey results will act as a backdrop for UCLG’s 4th Global Report on Decentralization and Local Democracy (GOLD IV, 2016), a publication that examines the situation of local governments around the world; the results will also be presented in various events such as the UCLG World Council during COP21 in December 2015. 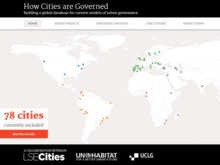