UN-Habitat Public Space Programme, Making Cities Together coalition of partners and Dandora Transformation League on Saturday launched a Model Street in Dandora Phase II, Nairobi. The Model Street has enabled easy access to the estate while allowing small scale road-side businesses to thrive. It is to serve as a benchmark to guide future interventions. It is an exemplar of how placemaking catalyses unlikely alliances among grassroots groups, the private sector, local government and other placemaking leaders to adapt, replicate and up-scale good practices from domestic to neighbourhood level, and trigger an avalanche of community empowerment initiatives by various stakeholders. In attendance, was the Executive Director of UN-Habitat, Ms. Maimunah Mohd Sharif., Founder of Dandora Transformation League Mr. Robinson Esialimba, UN-Habitat colleagues, Making Cities Together team, visitors from various parts of the city and the Dandora community.

Dandora is a low income neighbourhood located 11km from the city center, with a population of 141,885. The initiative has succeeded in addressing issues such as high crime rate, criminal youth gangs, youth unemployment, urban decay, unregulated dumpsite and its deleterious effects on both environment and health for surrounding communities and beyond, waste covering most open spaces. One of the immediate positive impact of the Model Street has been the general improvement in the well-being of local  residents. Below are some more specific results which can be attributed to the model street intervention:

Improved perceived safety and security - Residents now feel safer walking along the model street.  Anthony Kwach, a local resident explains, “These days even if I alight at midnight I have no worries. I know I will reach home safely without a problem. Because of lighting, I can see someone from 100m away.”

Improved livelihood opportunities - The improved streed enables street vendors to vend for longer hours and make more returns. Further, employment opportunities such as public space maintenance and security have been made possible for the youth. Charkes Gachanga, a local champion and the CEO of Dandora Transformation League explains, “Sometimes back, M-pesa and other businesses that make a fair amount of money would be closed by 7.00 pm due to fear of attacks. Today however, these and many other small businesses operate until 11 o’clock in the night.”

Improved relationship with authorities - the relationship between the local youth and the chief, and the sub-county administrator has greatly improved. This relationship has resulted into rare collaborations particularly with regard to reclaiming public spaces; better cohesion and good neighbourliness.

Improved play opportunities for children - As a result of the paving of the street block, children have now embraced skating as a sport, and to some, has become a possible career. Every Saturday, around 40 children and youth meet to skate on the model streets.

Improved drainage and environmental quality - The opened drainage lines have had a significant contribution to environmental health of the neighbourhood. This has solved the problem of overflowing sewer, flash floods and mud.

The Dandora Transformation League also won the Dubai International Award for Best Practices for their initiative where they will walk away with USD 30,000 to be awarded later this year. This initiative titled Courtyard System for Management of Public Spaces is an innovative community-driven approach in rehabilitation and management of public and semi-public space implemented. The initiative entails a competition where youth groups are challenged to compete against each other in creating the cleanest, greenest and safest public space in the area. During the 3-month-long competition, the youth are assessed based on before and after photos. Most of the transformation initiated during the competition have today been maintained due to income-generating activities.

The Executive Director of UN-Habitat expressed her gratitude in the efforts of DTL and Dandora residents. She encouraged them to continue working for a safe, green and healthy Dandora. The Dandora residents also acknowledged that Dandora is not a slum but an estate. Area residents make monthly contributions of 100 Kenya Shillings that go towards paying the youth responsible for maintenance courtyards.

To officially mark the opening, the local community named the avenue Badilisha street which means change in Swahili. This was preceded by a democratic process which led to the selection of the street names by a vote. The event saw other activities like a kids’ skating competition and open-air yoga for all the attendees.

The implementation saw a total of 25 trees planted, a total of 800m of roadway paved, drainages cleared and opened, 13 waste receptacles creatively designed with an art work and a quote to provide inspiration installed and four Gateways constructed. The Gateways were designed to provide grand entrances into the neighbourhood and to give a new identity to the street block. The implementation of the model street was also part of the whole placemaking process, and was done in co-creation with the local community – with youth and women providing labour. Further, the process inspired the local Member of Parliament, Hon. James Gakuya to support the initiative by paving the whole street though the Constituency Development Fund (CDF). This underscored the potential of co-production of public spaces. Given the elaborate process, including the statutory requirements, the construction of the street took about eighteen months. The detailed process was emphasised so as to facilitate learnings and to provide policy inputs for future interventions. 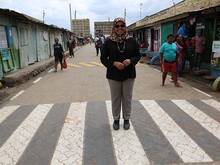 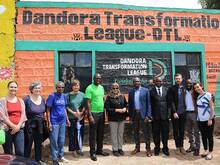