New Delhi, 8 October 2015: On the second day of the Urban Thinkers Campus (UTC) India hosted by the National Institute of Urban Affairs (NIUA), the organizers launched the National Campaign on Cities and Human Settlements.

The name of the Indian Campaign is motivated by SDG 11: “Make cities and human settlements inclusive, safe, resilient and sustainable”. By linking the Campaign to this goal, and with the support of UN-Habitat’s World Urban Campaign, the organizers aim to gather and strengthen the Urban Thinker Community in India.

NIUA will be the lead organization for this Campaign, and has announced that a slogan for the overall activities will be defined in the coming weeks through a participatory approach involving all interested stakeholders.

A Campaign Steering Committee will be formed and will develop a roadmap towards Habitat III and beyond – towards Sustainable Urban Development.

During his speech, the Joint Secretary Mr. Rajiv Ranjan Mishra highlighted the importance of this Campaign in order to promote stakeholder’s engagement and perspectives to enrich the efforts of the Indian government in order to implement national policies in a meaningful way.

Dr. Aisa Kirabo Kacyira thanked the Indian Government for its commitment and support towards this Campaign, as well as its efforts towards Habitat III and the Sustainable Development Agenda process. She emphasized that the success of the SDG implementation on a global level highly relies on India – a country full of drive towards transition and positive change. 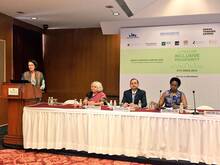 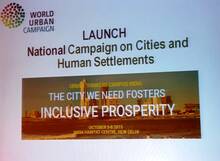