Naw Pyi Taw, 24 March 2015-- UN-Habitat will assist vulnerable communities on reconstructing community infrastructure in ethnic minority areas, and on reconstructing houses in Yangon region with a grant contribution of USD 5.3 million by the Government of Japan. Exchange of Notes between the Government of Japan, and four UN agencies, UN-Habitat, UNHCR, WFP and UNICEF was signed at a ceremony today in Naw Pyi Taw, the capital of Myanmar, in the presence of Myanmar’s Deputy Minister for Border Affairs Major General Tin Aung Chit, and Deputy Minister for Livestock, Fisheries and Rural Development Mr. Aung Myat Oo.

The project has specific objective of assisting vulnerable communities, mostly women and children, to respond to unexpected disasters through all project activities, promoting active participation of women, recovery of conflict and disaster affected communities’ and providing safer and healthy environment for children.

The project will support most vulnerable urban poor families to re-construct low-cost housing in Yangon and will assist conflict affected communities in restoration of community infrastructure in Mansi and Momauk Townships (Kachin State) and Pekkon Township (Shan State) through people’s process. UN-Habitat Country Programme Manager, Bijay Karmacharya, said “the Programme for Emergency Assistance to Poor and Vulnerable Community in Ethnic Minority Areas and Yangon is framed within the overall objective of helping Myanmar’s poor and vulnerable communities affected by conflicts and natural disasters to address the emergency needs to restore a normal life and to sustainably improve the quality of life”.

The programme for emergency assistance is expected to benefit over 65,000 poor and vulnerable people. Communities in Myanmar have been experiencing a series of socio economic setbacks due to conflicts, repeated natural disasters and extreme weather conditions. Over half a million people have been displaced due to conflict alone as of September 2014. In Kachin State nearly 100,000 people currently remain displaced from their homes and are accommodated in over 150 different locations and host communities; over 50 per cent are housed in camps located in areas beyond government control.

The Government of Japan is one of the strongest development partners of UN-Habitat; it has assisted vulnerable communities and supported over half a million ethnic people with its grant assistance over the last three years in a similar project. 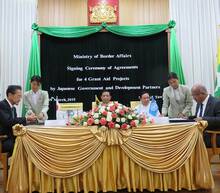