Yangon 5 October 2016-- Myanmar celebrated this year’s World Habitat Day, with the government reaffirming its commitment to make affordable housing a priority. UN Habitat representatives joined members of communities from a slum area in Hlaing Tharyar Township in Yangon’s periphery, who had organised a World Habitat Day whose theme was ‘Housing at the Centre’ celebration to draw attention to their lives.

Visiting guests, which ncluded Members of Parliament, NGOs, and academics, were treated to cultural and traditional dances from the Ayarwaddy Region from where many had migrated in the aftermath of natural disasters. Slum community members spoke of their needs and aspirations, including their biggest issue on the lack of security of shelter.

The community called on the Government to avoid slum evictions and to work with the urban poor in developing housing projects; these messages were upheld by UN Habitat Country Programme Manager Mr Bijay Karmacharya. UN-Habitat is in regular dialogues with the authorities of Yangon city for possible alternative solutions for the slums and squatting communities other than forcible evictions.

UN Habitat is also supporting the Government in its renewed efforts to find adequate and appropriate housing for all, and organised an International Conference on Affordable Housing on 3 October to mark World Habitat Day. Conference participants numbering over a hundred heard from a range of regional experiences emphasising the importance of partnerships and a range of housing delivery methods, including from Thailand, India, and Cambodia.

The presentations and discussions at the conference – with representatives from the Ministry of Construction, Yangon City Development Committee, civil society included the Myanmar Engineering Society, Association of Myanmar Architects, and international development agencies – is sure to promote an understanding of housing affordability as an underlying issue of formation of slum like communities as Myanmar continues on its historic transformation leading to economic growth.

Putting housing at the centre this World Habitat Day 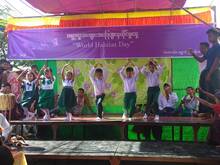