She succeeds Joan Clos of Spain to whom the Secretary-General is grateful for his dedicated service to the Organization. Dr. Clos led UN-Habitat during the pivotal years when the world’s population became majority urban.  During this time, he championed the development of a New Urban Agenda and Sustainable Development Goal 11 (SDG11), the first development goal focused on sustainable urbanization. His emphasis on urban planning and national urban policies has been widely appreciated and applied to plan and steer the world’s cities toward sustainability, economic and social progress and inclusion.

Ms. Sharif began her career as a Town Planner at the Municipal Council of Penang Island in 1985. In 2003, she was promoted to Director of Planning and Development, a position she held until November 2009. As Director, she was responsible for the preparation of structure and local plans, and was directly involved in development control of Penang City projects and landscape development. She also led a team for the planning and implementation of the Urban Renewal Projects in George Town. In November 2009, she was entrusted as the first General Manager to establish George Town World Heritage Incorporated and manage the George Town World Heritage Site which was inscribed by UNESCO in July 2008. 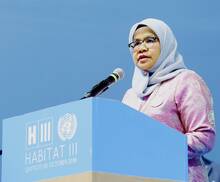