Morocco hosts First African Forum on Housing and Urban Development, ahead of Habitat III and COP22

Rabat 13 July 2016-- The Kingdom of Morocco, represented by the Ministry of Habitat and City Policy organised the first African Ministerial Forum on Housing and Urban Development (AMFHUD) on 11-12 May 2016, in Rabat under the theme: City Policies and Sustainable Development. Jointly organized with UN-Habitat, the Forum aimed at complementing, on a global scale, the preparatory process leading to Habitat III: The third UN Conference on Housing and Sustainable Urban Development to be held in Quito, Ecuador (17-21 October 2016).

It was also meant to contribute, on a regional scale, in addressing the issue of cities and their development and sustainability in Africa. The Forum gave Morocco and the African continent, represented by 17 ministerial delegations, an opportunity to showcase their approach towards the New Urban Agenda, to be adopted by the international community at Habitat III, and to promote the post-2015 Agenda spelt out in the Sustainable Development Goals (SDGs), in particular SDG 11: Make cities inclusive, safe, resilient and sustainable .

The event also tackled the issue of city sustainability, while keeping an eye on climate change, as per the recommendations of COP21 (Paris, December 2015) and in preparation of COP22, which Morocco will be hosting in November 2016. The inauguration of the event was presided over by H.E the Prime Minister of Morocco, Abdelihah Benkiran; the Moroccan Minister of Housing and Urban Policy, Hon. Nabil Ben Abdallah; the Mayor of the City of Dakar, Khalifa Sall and Dr. Joan Clos, United Nations Under-Secretary-General/UN-Habitat Executive Director and Secretary General of Habitat III.

In his opening remarks, Dr. Clos thanked "His Majesty the King of Morocco, Mohammed VI, for organising and hosting a crucial event for the future of Morocco, Africa and the world". He also said that "This forum, five months ahead of Habitat III and COP22, is a great opportunity to enrich the current global debate over sustainable urban development and climate change, in an unprecedented moment for urbanisation. For the first time in the history of development, the international community has understood that urbanisation is a source and engine for growth and a driving force for development".

Dr. Clos also highlighted Morocco’s experience of the cement tax used for financing public housing to be encouraged worldwide and showcased in Habitat III as an excellent example in Urban Economy. Discussions revolved around rapid urbanisation of the African continent. Africa is now experiencing an accelerated urban transformation, with over a billion inhabitants in 2009, 400 million of whom are living in cities. By 2030, 50% of Africans will be living in urban areas.

With 12 additional cities of more than 3 million inhabitants, and 2 cities of over 10 million, Africa is now facing poverty urbanization. Indeed, 60% of urban population are living in informal housing, which is the main component of major habitats in most cities and megacities like Cairo, Lagos, Kinshasa, Luanda and Abidjan. Two thirds of the total population of Africa (2.5 billion) will be living in cities fifty years from now. In other words, the urban population will have increased four-fold by then. During the opening ceremony, Dr. Clos and Hon. Nabil Benabdallah signed the Host Country Agreement between the Kingdom of Morocco and UN-Habitat. This was the culmination of 20 years of effective partnership between Morocco and UN-Habitat. 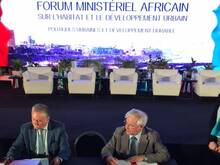 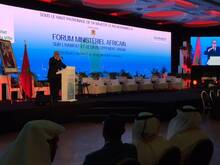