More than 4,800 IDPs to benefit from new shelter site in Iraq

Darkar Ajam, Iraq 13 May 2016—A new shelter site for internally displaced persons (IDPs) aimed at housing some 4,800 IDPs Darkar Ajam, Zakho District, Dohuk Governorate, was inaugurated this week. The shelter that was as a result of contributions from the Government of Japan, and executed by UN-Habitat provides prefabricated shelter units to accommodate vulnerable IDPs, provide basic infrastructure, and public facilities such as a reproductive health clinic, a women’s social center and a security building. With the continuing terror and violence inflicted by the so-called State of Iraq and the Levant (ISIL), the figures of IDPs in Iraq had reached 3.4 million as of April 2016.

One of the governorates that have been receiving large numbers of displaced persons is Dohuk Governorate. While the governorate has stepped forward to support the IDPs, the severe budget crisis along with the protracted nature of the conflict have caused significant distress to both IDPs and host communities in Dohuk. Shedding light on this, Mr. Farhad Atrushi, Governor of Dohuk, expressed his appreciation to UN-Habitat and the Government of Japan for supporting the governorate in helping the most vulnerable people affected by the conflict. The New Urban Agenda necessitates embracing urbanization at all levels of human settlements across physical space.

The inclusion of humanitarian situations in this agenda is essential in order to assist governments in addressing future challenges. In similar circumstances of long-term displacement, provisional shelter interventions often turn into slums. Inadequate and insecure shelter conditions also endanger women and girls, exposing them to higher risks of sexual and gender-based violence. Speaking at the function, UN-Habitat Deputy Executive Director Dr. Aisa Kirabo Kacyira stated that the new durable shelter site will offer vulnerable IDPs, who have been suffering from severe weather conditions and lack of security, the ability to maintain dignified lives.

Mr. Fumio Iwai, Ambassador of Japan to Iraq, stated that the Government of Japan has already provided more than USD 220 million to Iraq since 2014 to support its humanitarian efforts, and will continue to support returns of displaced persons to their homes and stabilization of librated areas through reconstruction of housing and infrastructure. 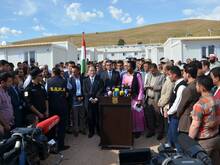 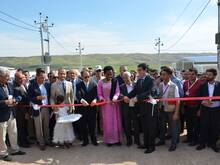